What is it about the crossroads of the world that I find so fascinating? Perhaps it’s the rich history, the battlefields of past dynasties, or the allure of the trade routes that pass through them. But more than anything, I think it comes down to the blend of cultures one finds in these areas. Because of the constant movement of people, goods, and ideas in these areas, one finds a dazzling blend of different art, foods, religions, and languages.  The Caucasus most definitely qualifies as this type of environment, as it historically sits on the crossroads between powerful empires, and has been continuously influenced by them over the centuries.  Subsequently, it has been a fascinating area of the world for me to explore and once I had the opportunity to visit this are of the world in November of 2012, I took it.

I traveled to the Caucasus with my friends Joel Oleson and Paul Swider, starting in the country of Georgia, a fascinating place with a history of conflict, both old and new. Caught between the Persian and Russian empires, it has gone to battle with both empires multiple times, including quite recently during the 2008 conflict with Russia over South Ossetia. The name of the country, curiously enough, is actually known by locals as Sakartvelo (საქართველო), who refer to themselves as Kartvelebi (ქართველები.) The names ‘Georgia’ and ‘Georgians’ were given top them by Europeans who noted the locals particular devotion to Saint George. This, of course, causes much consternation to those who confuse the country with the southern US state of Georgia. 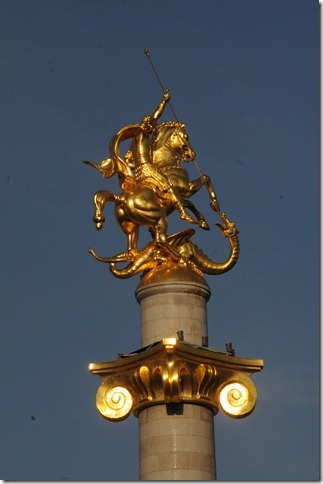 Georgia as a political entity and sovereign state has a long and complicated history, starting from its origins as the kingdom of Kartli, also known as Iberia to those in the Western world. Influenced by Roman and later Byzantium influences, it was only the second country in the world to officially take up Christianity as a state religion, following shortly behind Armenia, our second stop on this trip.

The ancient capital of Kartli was the city of Mtshketa, a city that remained the capital city for eight centuries. Still in existence today, this now-small town is steeped in Georgian history, and includes many of the major historical Georgian landmarks and religious sites, including Jvari Monastery, the reputed location of the first cross erected in Georgia by Saint Nino in the early 4th century.

Built sometime between the years 590 and 605, the Great Church of Jvari at the monastery is small and unimposing, but with an almost palpable feel of history emanating from its walls. Inside the church, I was hit with the smell of candles, and witnessed the devout praying by the rock formation that held the original cross.

The monastery also commands an excellent view of the city below, it’s picturesque valley cut in half by the confluence of the Aragvi and Kura rivers. Standing there looking down on the old capital, it was fascinating to think of the history of this place and how it was once the seat of a powerful civilization that throughout the centuries of conflict still managed to maintain an independent identity to this day. 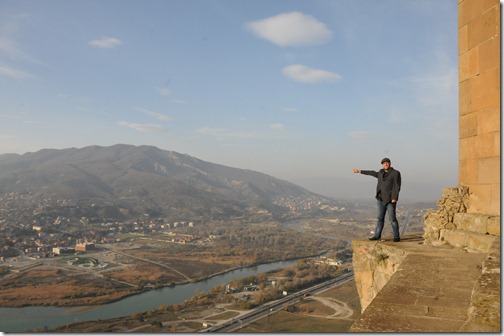 And below, in the city of Mtshketa, the most sacred of Georgian cathedrals, the Svetitskhovelia Cathedral, a burial place of Georgian kings, queens, and religious figures, and the reputed location of the burial site of Christ’s mantle (robe), reportedly brought to Georgia by a Mtskheta Jew named Elias.

This church, accessible via a short drive downhill from the monastery, is a mecca for the Georgian Orthodox Church, the Svetitshkhoveli Cathedral, an institution in full communion with other churches in Eastern Orthodoxy, including the Greek and Russian Orthodox Churches.

Buried in this church are ten of the most famous Georgian kings, including King Erekle II’s tomb, the Georgian monarch who was famous (infamous) as the monarch who agreed to Russian control over the area in an attempt to protect them from Persian influences and more closely align Georgia with Europe. 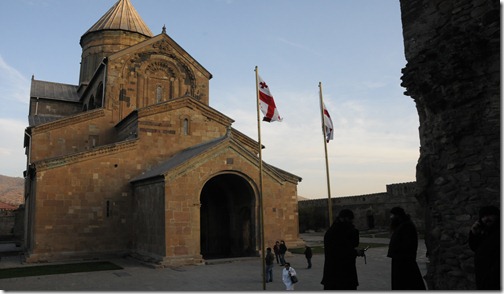 The original Svetitskhoveli Cathedral was build in the 4th century AD, but was damaged by numerous attacks over the years and several earthquakes. The present structure was built around the year 1020, and the defensive wall around the site was built later in 1787.

Svetitshkoveli Cathedral is truly a spiritual place, and enormously important in the lives of Georgian Orthodox believers. Here in this ancient capital, surrounded by thousands of years of Georgian history, you can distinctly feel the soul of the Georgian people.

The beautiful modern capital of Georgia is the cosmopolitan city of Tbilisi, a city built upon rolling hills and a riverbed carved into a series of cliffs. I have seen many cities in my travels, but I can honestly say that this now ranks as one of my favorites.  Tbilisi is a city of contrasts, with crumbling old pre-Soviet buildings gracefully decaying next to beautiful new modern temples of glass and steel.

Tbilisi is built along the cliff banks of the Kura River, and all along the river you can find housing that comes right to the edge of the cliff that supports one of the oldest and historic neighborhoods in the city, known as the Metekhi. 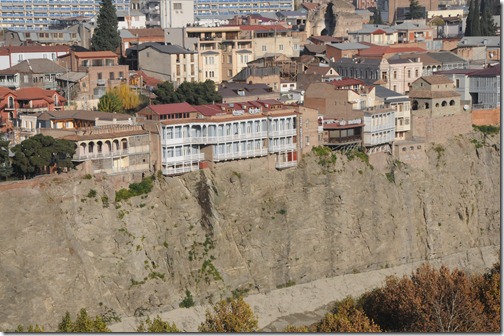 The recent history of Georgia is not complete without an understanding of the lasting impact that nearly 70 years of Soviet rule had on the city. As a witness to this, the Socialist Realist statue called the Kartlis Deda (ქართლის დედა), or ‘Mother of Georgia (Kartli)’ stares down at the city from high above the cliffs. 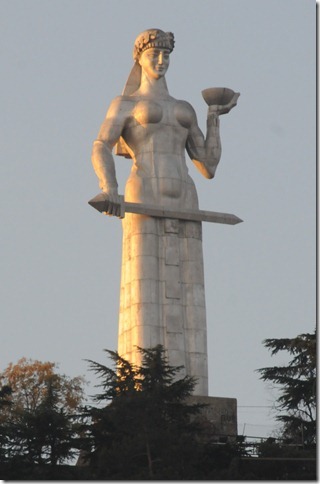 Influences flowed both ways, of course, and many Georgians found their way into the ranks of the Soviet elite, including most infamously, Joseph Stalin, who was originally born as Ioseb Besarionis dze Dzhugashvili (იოსებ ბესარიონის ძე ჯუღაშვილი) in the town of Gori in Georgia.  A museum to Stalin can still be found here, although they recently did finally take down the statue of him in the town square.

Georgian culture was also exported to the rest of the Soviet Union, and still has a major impact on many of the dishes which are commonly served in many restaurants in the Russian speaking world.  Indeed, the cuisine here in Georgia is something to be savored, and we ate some amazing dishes here!

Tbilisi contains several hamams, commonly referred to as Turkish baths. Indeed, the city itself was built on hot springs that gave the city its name, derived from the Old Georgian word Tpili" (თბილი), that means ‘warm.’

Since independence from Soviet rule in 1991, and especially in recent years, Georgia has been working hard to create new public spaces and reinvent itself. New modernist buildings and bridges are springing up all around town, with the new Presidential Palace and the Bridge of Peace as great examples of this.

But ultimately, I found Georgia’s soul within the narrow alleyways of the Old City. Walking through the streets of Old Tbilisi, you can definitely feel the history underneath your feet and crumbling off of the buildings around you.

As part of our trip to the Caucasus, we journeyed across land to Armenia by car and had a chance to take in some of the beautiful countryside in Georgia between Tbilisi and the border.

Some of the diversity in the country can be seen in some of the villages along the way. Where many of the countries in the Caucasus have become very polarized along religious lines, there is much more diversity in Georgia, and you can find mosques in villages and several Synagogues in the major cities.

And, of course, Georgia is famous for mouth watering fruits, including pomegranates, persimmons, mandarin oranges, apples, and much more.  All along the road one can stop and buy bags of fresh fruit produce for a fraction of what it would cost in other places.

The country of Georgia is a colorful, diverse, and beautiful land with some amazing food and even more amazing people.  For us, however, it was but the first stop on our tour, and we continued on to the nation of Armenia, another ancient Caucasus land full of contrasts and amazing foods that I cover in my next blog post!

One thought on “Charming Caucasus Part I: The Country of Georgia”