There is just something about monkeys that brings a smile to your face, whether it’s at the zoo, in the wild, or running loose around a temple in a tropical paradise. The latter applies to numerous locations on the Indonesian island of Bali, a place I had the good fortune to be able to visit after an Australian speaking event back in May of 2011. It was a short stopover, but I saw an amazing amount in that period of time.

To understand Bali you must first understand its history. Bali is the home to the vast majority of Indonesia’s Hindu minority.  While a minority in the country as a whole, on the island they comprise over 90% of the population. This is no small accident, but the result of the fall of the Hindu Majapahit Empire, whose intellectuals, artists, and Hindu religious leaders fled from the island of Java, where Jakarta is located, to Bali. This exodus led the Balinese people to be very strongly attached to their Hindu roots, as many of them still are today.  For example, nearly every house on the entire island has its own personal temple.

The number of temples on the island of Bali is staggering. In a single day I visited at least five major ‘puras,’ or temples, and barely scratched the surface. I was told that there are at least 20,000 puras on the island, not counting the individual ones in each household. Needless to say, it is a very religious and spiritual place, and you can find religious offerings of leaves, food, and incense everywhere, even at the airport duty free shops!

The puras (temples) were welcoming places, where tourists were invited inside the outer sanctuary areas. Note that it was not permitted to enter inside the inner sanctuary, at least not during ceremonies, of which I noticed plenty of. Just ask before moving from one area of a temple to another, the locals are kind and are happy to explain to you their beliefs.

On that note, the Balinese people are some of the warmest, friendliest people you can imagine as well. While most are not rich in wealth, they were rich with happiness and social interaction. You never saw motorists yelling at each other or shopkeepers being gruff here, it really did appear to be a little bit of heaven on earth.

Children played freely outside and ate fruit directly from the trees. They were also eager to smile and giggle at the inquiring foreigner, a trait that is sometimes lost in some of the places of the world more trodden by tourist feet. 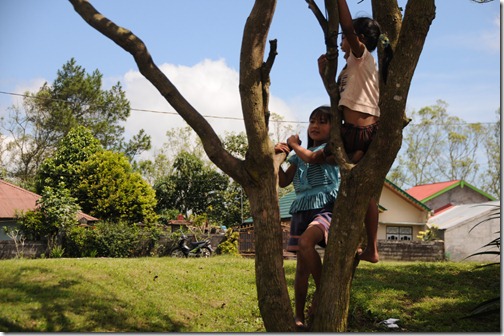 One interesting industry that is springing up in Bali is the concept of Kopi Luwak, made famous by the movie ‘Bucket List.’  That’s right, this is the famous ‘poop coffee’, made from coffee beans (ahem) excreted from the bowels of an Asian Palm Civet, a type of cat. The beans are roasted and then sold overseas for prices ten to twenty times higher than your regular coffee. Yeah, I tried a cup…seemed all right, and I didn’t end up with Hepatitis afterwards.

Food was indeed a big part of the Bali experience, and you can’t leave here without experiencing what they have to offer. From bakeries on mopeds to five star restaurants, Bali has a lot to offer. 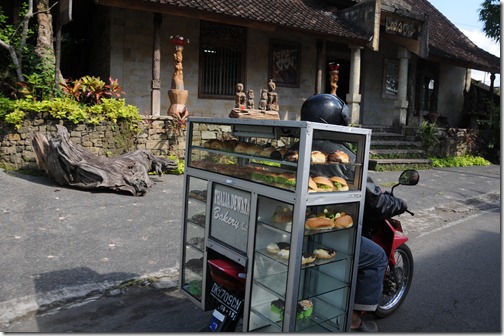 But the most interesting and unique offering I found was the local delicacy called ‘Babi Guling,’ or roast suckling pig. As you can see in the picture, the pig portion of the meal is only a very small part of the overall dish itself, and rice, vegetables, and broth make up the rest of the meal. This is definitely a local dish, and is only prepared in certain parts of Bali as well. But well worth it if you have a chance, it was my favorite dish there. 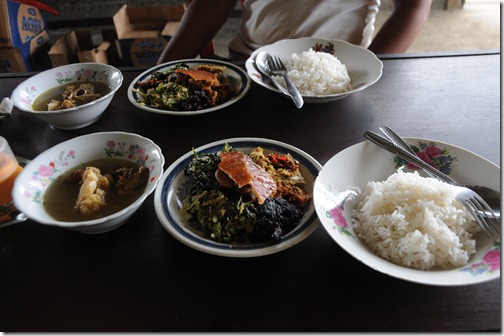 Did I mention the numerous temples on Bali? There were temples in the mountains, temples in the valleys, and temples on the lakes, such as the Ulun Danu Temple complex at Lake Bratan, one of the most picturesque on the entire trip.

Simply traveling around the island is an experience in itself. Bali, along with most of Indonesia, is highly volcanic, with multiple active volcanoes including Mount Batur. This volcano is highly sacred to the Balinese, but also very active, having last erupted as recently as the year 2000.

My tour took me around the twin lakes of the Wanagiri area of Bali, a place of extraordinary beauty, flowers, and even more temples.

And for the record, if bats are not your thing, then perhaps you may want to pass on Bali. It’s hard to tell from this picture, but these bats, called kalong had wingspans of several feet each. They were simply massive, and there were hoards and hoards of them in the jungles near the Alas Kedaton Pura.

Indeed, that temple complex was interesting both in the number of bats, but also in the number of monkeys it harbored. What was a surprise in this temple was that one of these monkeys decided he did NOT like my hat, and attempted to take it from me. He was quite aggressive as well, shrieking at me and making a show of force. Needless to say, he didn’t get the hat, I fed him to one of the bats (no, not really.) 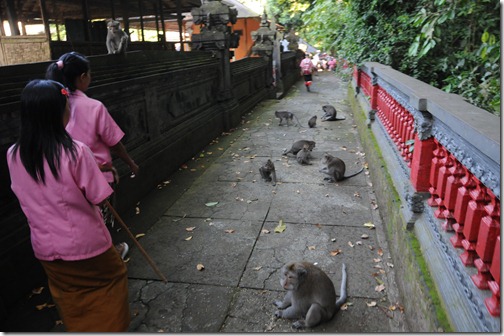 There is a sad side to Bali, as the nightclub area of Kuta in Denpasar is also the location of the Bali Bombings of 2002, a terrorist attack that killed 202 people and injured 240 more. The locals have setup a shrine as a memorial to that horrible attack, and it is moving to visit it and see how the Balinese deal with loss and tragedy.

Spending a day in Bali was an amazing experience, as the sights, sounds, and tastes all combine to make you feel like you’ve witnessed a small bit of paradise on earth. Watching the sunset over Tanah Lot temple is an immensely satisfying experience, and seeing the joy and spirituality of the Balinese makes you long to return again. Indeed, the next time I am here I intend to spend much longer in this gem of a place, as few places have touched me in quite the same way as the island paradise of Bali has.

One thought on “Bali – Monkeys, Bats, and Paradise on Earth”