In May of 2010 I was invited to speak at my first event in South America, this one in Lima, Peru! Peru is definitely one of those places that were at the top of my ‘must do list,’ so it was exciting to finally get a chance to get down there, not to mention that South America was the last populated continent that I had yet to speak on.

The speaker list for this trip included many of my closest friends and acquaintances from around the world, Joel Oleson (SharePoint Joel), Agnes Molnar from Hungary, Toni Frankola from Croatia, and Jose Morales, the coordinator of the event, a Peruvian who lived and worked in Slovenia for years. I was also fortunate enough to be able to join my younger brother David for this trip, a college student with a Jesus-style haircut that would later earn him wide fame across Peru. 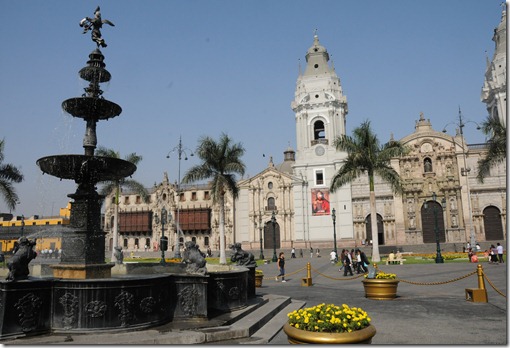 Lima itself is beautiful, and the Spanish influence here is unmistakable.  The center of the city is full of old Spanish churches, residences, and monasteries.  We toured the catacombs under the Basilica of San Francisco and saw pits full of bones, all laid out in geometric patterns, a fascinating, yet somewhat surreal spectacle.

The Historic Center of Lima is a World Heritage site, and for good reason.  The level of detail on buildings such as the Archbishops Palace is intricate and beautiful. 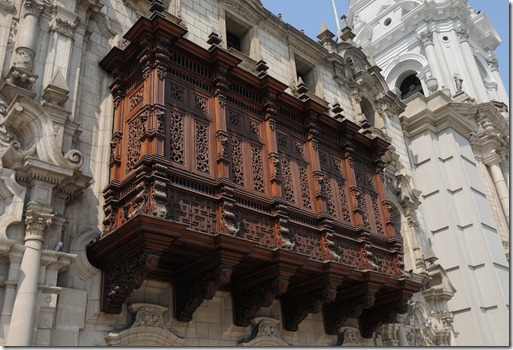 A trip to Lima just wouldn’t be the same without a sample of the famous ‘Pisco Sour’, a drink made of lemon juice, egg whites, and simple syrup. We sampled the drink in Morris’ Bar, the location that lays claim to the invention or the original drink, though I’m told this is disputed by Chileans. 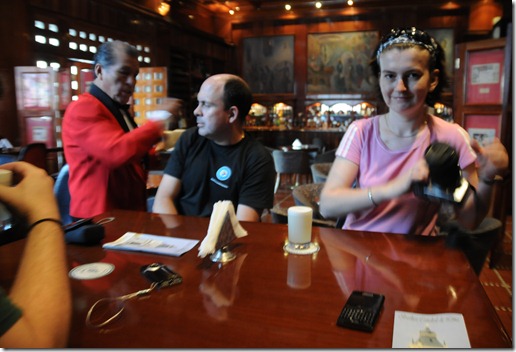 After our tour of Lima, we presented at the first ever Peruvian SharePoint Conference! This was also my first time presenting with a live translator who sat in a UN-style cubicle in the back and relayed what I said to the attendees who all wore microphones. Was definitely a different experience…those translators were unbelievable and very fast.  I admit that I even tried to trip them up a few times by speaking fast…they managed to keep up with me the entire time though.

Oh, and one more thing…those of us who speak at Technical conferences are used the the ubiquitous ‘Speaker Shirt.’ Some of these are better than others, but it’s typically a fairly low quality shirt that you wear once or twice before demoting it to a rag cloth or use it to paint the kitchen with. Not this event! Jose organized to get the speakers a full-on wool poncho. This remains one of the only speaker shirts I’ve kept long-term, you can see what I’m talking about in later pictures of this post.

After the event, Jose organized a planned trip up to the old Incan capital of Cusco! I had been looking forward to this visit, as Cusco was a bustling capital of the Incan empire before it was conquered by the Spanish in 1533. The churches of Cusco are all built on the foundation stones of the old Incan temples, such as the case of the Church of Santo Domingo, which was built on the site of the opulent Incan Coricancha, or “Golden” temple.  In fact, because of the advanced Incan building techniques, which involved splitting stones along natural cracks and fitting them together perfectly like a jigsaw puzzle, these foundations are incredibly strong.  When Cusco was hit by an earthquake in 1950, the Incan walls all remained intact, while the Spanish structures above, built with traditional masonry techniques, were themselves heavily damaged. 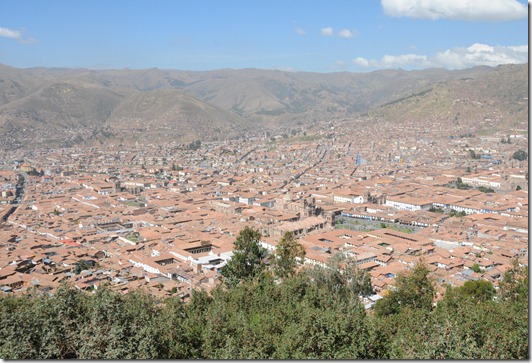 The ghosts of its Incan past are evident in the tongues of the people who live there, as the majority of the local population converses in Quechua, a modern form of the same language spoken by the Incans. 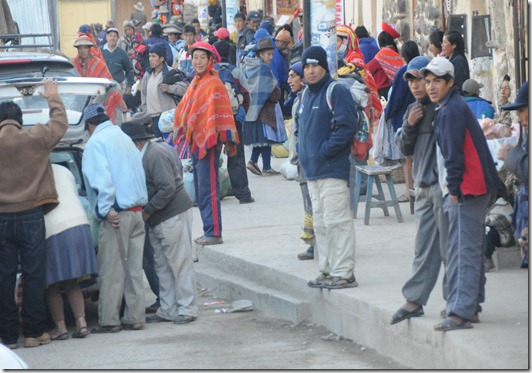 The hills surrounding Cusco are surrounded by important pre-Columbian sites such as Sacsayhuamán, a series of stone walls that from the air appeared to be the head of a puma, with the city of Cusco forming the body. 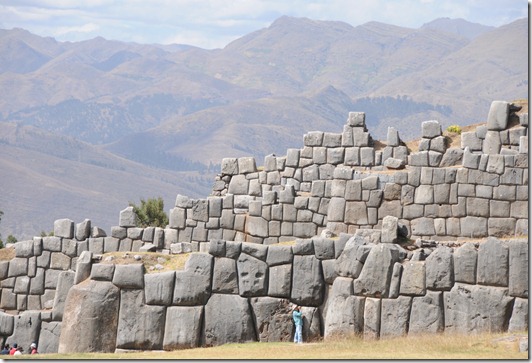 OK, now I mentioned we were given these wool ponchos as speaker shirts at the event…and I also mentioned my brother David’s Jesus-style haircut. Well, combined together, this gave him a very interesting aura, with random people on the street yelling out to him “¡Jesús Cristo!” He played long with it and even got a free drinks out of the fame and fortune, as I recall. 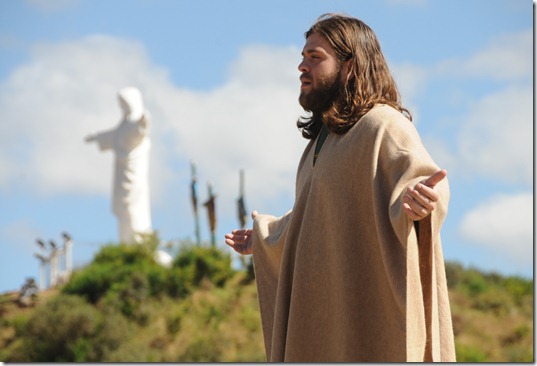 The Incans built their empire on incredibly tough terrain, which posed its own challenges for agriculture.  In response, they built terraced fields up the sides of mountains, which allowed them to plant crops on the sides of mountains. These things were everywhere in the area, some of them were major tourist attractions, such as the ones at Ollantaytambo shown below, while others were untouched and slowly falling apart. You could get a sense for the extent of the power of the Incan empire from structures like this.

On interesting gastronomical note about Peru…one of the delicacies here is known as ‘Cuy.’ Well folks, Cuy is Guinea Pig…yes, the cute cuddly variety. Cuy is a popular dish in Peru and Ecuador and an important part of the local diet here. This is due to the fact that they are easy to raise, requiring much less room to be raised than other forms of livestock and reproducing very quickly.

In addition to Cuy, another important part of the diet here is a drink called Chicha, which is made out of mashed purple corn (Maize.) We drank quite a bit of Chicha while we were in Cusco, and it was quite delicious to be honest.

Our most important destination still awaited us…the lost city of Machu Picchu! This was definitely exciting, and just getting there was a challenge in itself. Some tourists choose to hike the Incan Trail, a four or five day trek that roughly mirrors the path that the Incans would have taken to get there. Others with less time to spare, like us, took the substantially more modern train. Train or trek is the only way into Machu Picchu, there are no roads leading in.  Once in the valley, however, there are some local roads in the area that allow for buses to take people from the train station up to the actual ruins themselves.

What can I say about Machu Picchu? It is definitely as fascinating of a place as people say. You stand on the top of a ridge, overlooking cliffs on both sides, with wild jungle vegetation on the mountains all around you. If you get there early enough in the day, you also avoid the crush of tourists, which is what we did and were able to have the place mostly to ourselves. 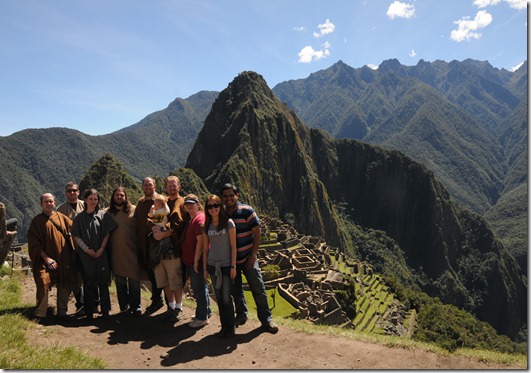 Most of the buildings in Machu Picchu were simply cleared of vegetation but were not restored. There are a few exceptions, buildings where they rebuild the thatch roofs to demonstrate what the buildings would have looked like when the Incans were here.  Talk about a nice view from your bedroom window!

With sites such as Sacsayhuamán that the Spanish discovered, all of the temples and religious sites were destroyed deliberately.  Since Machu Picchu was never found by the Spanish, it had the distinct privilege of maintaining many of those religious buildings, such as the Temple of the Sun and the Temple of the Moon.

One can imagine this place being able to support a very large population.  Indeed, archeologists believe that it was used after the Spanish conquest, at least for a while.  No one really knows what happened to the local population that lived here, however. Some believe that they abandoned the place and went deeper into the jungle to escape the Spanish persecution. In fact, there are stories that the place or places that they went to remain to be discovered, and there may be additional lost cities deep within the jungle.

While it seems odd that modern society with its satellites and airplanes might be unable to find the remnants of lost civilization, I have read stories of Mayan Cities only being discovered within the past decade or so. Subsequently, I wouldn’t put it past the Incans to have found a way to protect and preserve their culture deep in the Peruvian jungle, hidden from the onslaught of modern society.

Seeing one of the ‘new seven wonders of the world’ in Machu Picchu was definitely the highlight of our trip. Standing high on that ridge, you can almost sense the ghosts of the Incans who inhabited this place. That failing, you can most definitely find their spirits in the people who remain in the cities below,  the direct descendants of that lost civilization.

2 thoughts on “Peru – Ghosts of an Incan Empire”