Imagine the most impressive blowhole you’ve ever seen. Now multiple that single blowhole by a factor of several hundred and stretch the lot of them across five long kilometers of coastline. To add to the experience, have them erupt continuously like a series of massive chain explosions constantly moving up and down the coast.

Now throw in an ancient Stonehenge lookalike and some pyramids and you’d probably be convinced I dreamt up the place. But this fantastical place does exist, and I was fortunate enough to have a short visit there in June, 2013. It is officially known as the Kingdom of Tonga, the last of the Pacific Ocean’s monarchies and one of the most impressive tourist destinations I’ve seen in a while.

Pyramids of Tonga – The ‘Langi’

It surprises most guests, myself included, that there are indeed real old-world Pyramids on Tonga, known as the ‘Langi.’ These Pyramids were ancient royal tombs, and there are a total of 45 within the Kingdom itself. The most impressive concentration of them can be found near the city of Mu’a, not far from the airport. They were built by an ancient seafaring Polynesian empire called the Tu’i Tonga Empire, which by some accounts stretched for over 2000 miles throughout the region. 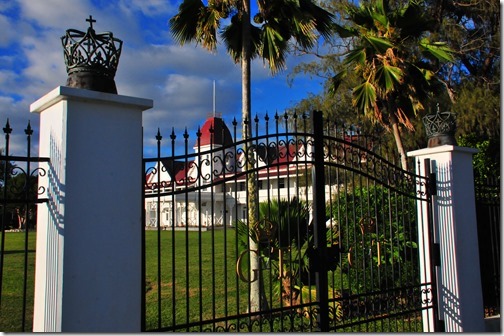 The descendants of those original Tongan chiefs are still around today, in the form of the Tongan Royal Family and the current line of Tongan Kings. And what would be a King without a Royal Palace, of course? As you’d expect, they have one of those too, prominently located along the waterfront in the capital Nuku’alofa. Built in 1867, it has the look of a gentile country club as opposed to a palace, but it is still impressive and unique in many ways.

The Ha’amonga ‘a Maui Trilithon

Impressive blowholes aside, what really surprised me most of all in Tonga was the sight of a Stonehenge look-alike, an ancient Trilithon called ‘Ha’amonga ‘a Maui,’ or ‘Burden of Maui’ by the locals. This structure was built by the ancient Tongans around 800 years ago. Considering that each stone weighs 30-40 tons, it was a major feat by the ancient Tongans to construct this and the pyramids. The led many to believe that the Tongan Empire was much more advanced than people realized.

Above all else, the Tongan people are the real draw here though. Deeply religious and highly friendly, they provide strong incentive for me to return to this tourist paradise. Here, amongst the descendants of an ancient seafaring empire, surrounded by spectacles of water and stone, I found myself a great Polynesian paradise virtually untouched by the long arm of tourism. Given the amazing things I saw during my short visit, I can’t imagine it will go unnoticed forever.