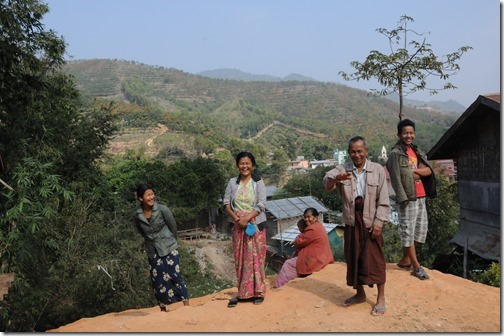 A lot has been written about how the country of Burma (officially known as the Republic of the Union of Myanmar or just Myanmar) is the next tourist hot spot. But despite the recent thawing of relations between the military government and western nations, it can still be a challenge to arrange for a tourist visa, and many embassies such as the one in Washington DC are overwhelmed with applications and can take months to process.

The reality is that it is possible for citizens of most Western countries to get into Burma without obtaining a visa in advance, and it can be done at land border crossings. My good friend Joel Oleson and I tested out this process in January 2013 while we were in Northern Thailand, and found it to be relatively easy. 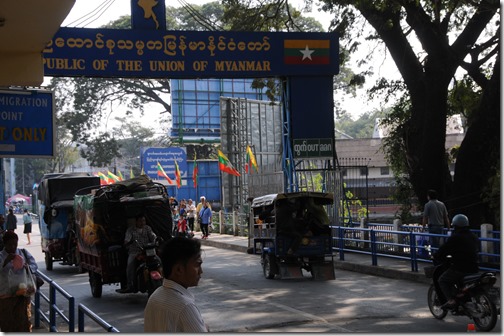 The only real catch to this approach is that you need to surrender your passport at the border crossing and you don’t get it back until you cross back into Thailand using the same border crossing. At the same time, they don’t allow you outside of the immediate region unless you agree to take (and pay for) an approved guide to take you to other places in Burma.  For those who are interested, scroll down to the bottom of this post and I walk through the steps necessary to enter Burma. Please note that these steps were accurate as of January of 2013, but of course are subject to change, so having flexibility with your plans is probably a good idea.

In our case, we opted to stay within the immediate confines of the Burmese city of Tachileik, a busy border crossing outpost that was historically often used as a smuggling route for opium in the Golden Triangle.  Immediately after crossing the small river (really a stream) dividing Thailand and Burma, a large area of shops selling a wide variety of fake goods can be found. 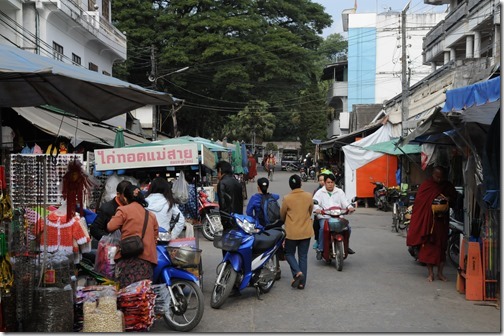 Now, I’ve seen some markets selling questionable goods before, but this one really was a no-holds barred place. Display cases with knock-off iPhones, Blackberries, Android devices, etc. were all over the place here. In fact, they were selling things which don’t even exist, such as an iPad labeled ‘iPad6.’ 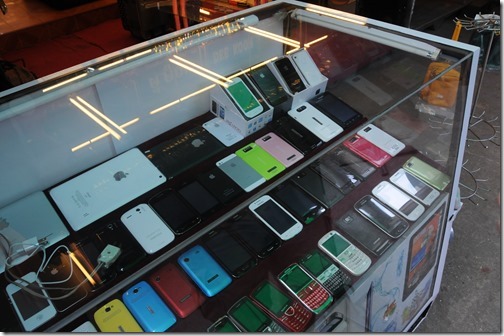 The city itself is fairly unimpressive, but it is easy (and cheap) to arrange for a driver to take you to the various sites that the region has to offer. I found that it is possible to negotiate with US Dollars, but that a better and more readily acceptable currency to use is the Thai Baht. 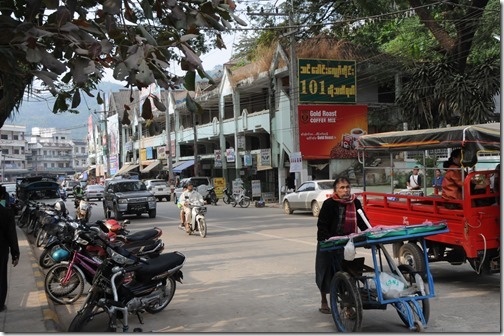 In our short time in Burma, both Joel and I agreed that the highlight of the trip was a visit to the nearby Akha village, an indigenous hill tribe that is genetically, culturally, and linguistically distinct from the Burmese. 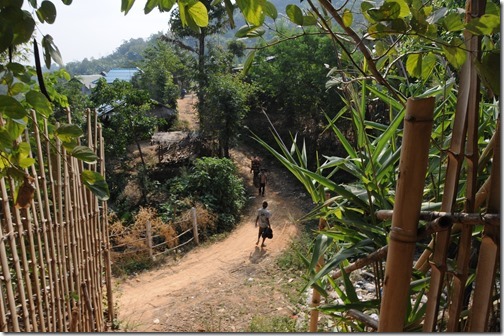 One of my biggest joys in travel is going to a place where tourists rarely go, where you look and feel very foreign, and virtually everything, including customs, language, and food is foreign and unrecognizable. The visit to this village satisfied those criteria, and we spent our time here wandering around and getting incredulous looks from the local villagers. 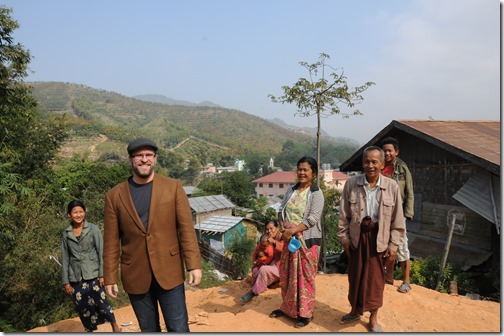 The Akha people originated in China and migrated to Southeast Asia in the early 1900s. They live in the three countries in this region of Burma, Laos, and Thailand, and in many cases do not have ‘official’ status in the country in which they live. 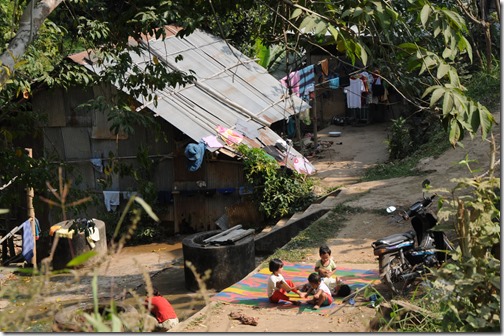 The stop in the Akha village was amazing, and we spent a good deal of time just walking around and attempting to communicate with the friendly hill tribe residents there.

On the other hand, I was much less impressed by the next stop, which was near the gold course and known as the ‘Regina Hilltribe Village.’ This was a definite tourist trap, with inflated prices for trinkets and women and children dolled up in traditional garb in a setting that was obviously not a real village. I felt bad for the hill tribe people that they had on display there, as it had the feel of a ‘human zoo,’ to be completely honest with you. My recommendation is to spend more time interfacing with the real Akha or Kayan (Long Neck) tribes in their native villages, though this is sometimes difficult to explain to the touts who try to direct you to places like the Regina Hilltribe Village instead. 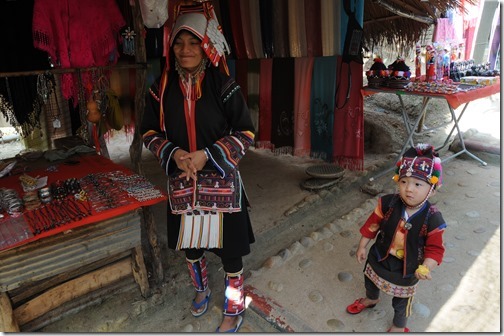 While things are opening up quite a bit, there are still tensions in this country which can be felt. For example, we wanted to approach a statue of King Bayinnaug, a major historical figure in Burmese history, but were informed (quite nicely, I might add) by a military guard in fatigues that we not allowed as the statue was bombed back in 2003.  It was a somewhat sobering reminder of the issues this country has faced and is still facing internally. 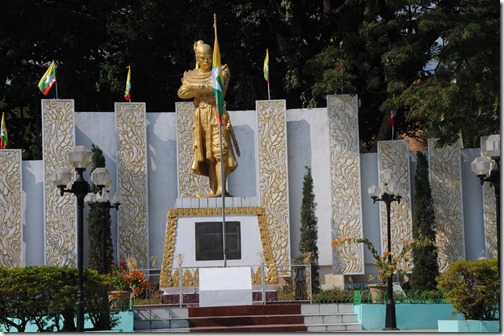 Tachileik most definitely has the feel of a border city, with a great deal of people and cargo movement. Historically, there has been a great deal of illicit trade that moves through this area, unfortunately including wild animal parts that go for sale in China. I didn’t note anything like this while I was here, though of course I didn’t go around asking to see illicit goods either. 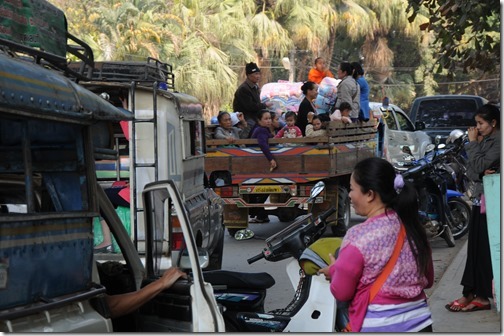 I did, however, ask for a Burmese Tea Leaf Salad (Lahpet Thohk) for lunch, a dish I was familiar with but had never tried in its native setting. It was truly amazing… 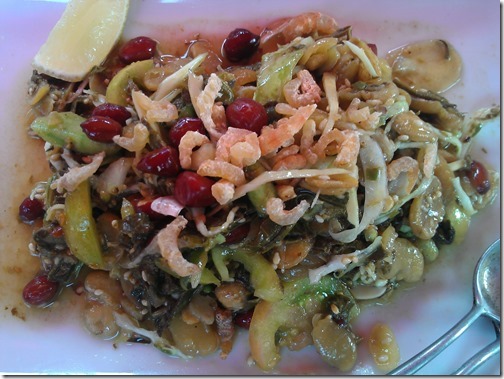 Below is my high-level guide to a visa and hassle-free tour of Burma: 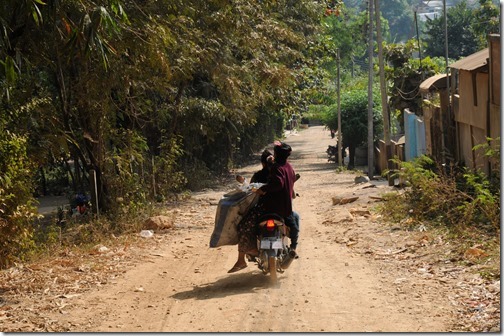 Enjoy! We just scratched the surface of what Burma has to offer. If we hadn’t had obligations to meet in the upcoming days, we seriously would have considered going further inland. I most definitely want to return to this fascinating place and explore more of it!

One thought on “Touring Burma without a Visa”

Error: Twitter did not respond. Please wait a few minutes and refresh this page.