I’ll be completely honest with you…until recently I wasn’t even aware that there was a place in the world called Istria. Even en route to the place, I mistakenly referred to it as part of Dalmatia, only to be corrected by my Croatian friends that this portion of the Adriatic coast of their country has been known by it’s Roman name Istria (Histria) for over 2000 years.

And what a place it is…city after beautiful sparkling seaside city sprinkled along the coast south of Trieste, Italy, each one heavily influenced by their past conquerors, Illyrians, Romans, Venetians, Hapsburgs, Italians, and Slavs.  This place is blessed with a sun-drenched coast, relatively low prices, and an easygoing multilingual population. Most people here speak English, not to mention Croatian, Italian, and German, making it a near-perfect vacation destination.  And did I mention the unbelievable well-preserved Roman ruins? More on that later, however.

My trip to Istria was spurred by an invitation to speak at an April 2012 event in Croatian city of Rovinj, along the coast of the Adriatic Sea.  I had been to Croatia twice before, as documented in a previous blog post I wrote on the area, but had focused mainly on the capital of Zagreb and the Dalmatian coastal cities of Split and Dubrovnik. To get to Rovinj, however, I flew into the beautiful and historic city of Venice, taking the opportunity to make a quick stopover there and blogging the details.  My next step was to make the drive from Venice to Rovinj, which involves an approximately 3 hour journey around the northern tip of the Adriatic Sea and down the coast and onto the Istrian peninsula.

Immediately after leaving Italy, one must enter the small sliver of the country of Slovenia that borders the sea known as Slovenian Istria.  Slovenia, more known as a mountain country, is quite beautiful in this area, and matches the scenery further south.

While driving through Istria, I noted that the Istrian countryside is full of row after row of crumbling stone fencing and multiple curious stone huts called kažun, which can be easily seen from the road. I learned that these huts were used by shepherds to store tools and to allow them to sleep near their flocks while they were in the field. These things are everywhere in Istria, littering the countryside and conjuring up images of past lonely shepherds, napping in their tiny huts while their flocks roamed the fields. 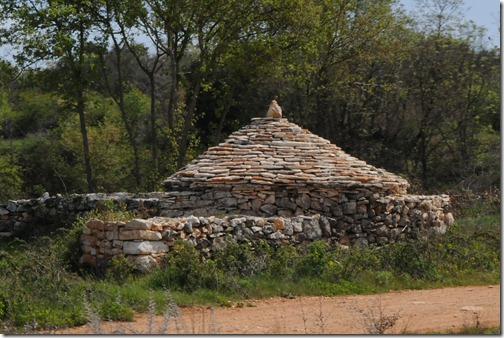 Several hours later, I arrived in my destination, the seaside city of Rovinj. Rovinj, known as Rovigno in Italian, is an ancient city that was built on a small island just off the coast.  In the 18th century the channel was filled in and island was connected to the mainland, providing the city with access to the coast.

Rovinj was one of the most important cities under control of the Republic of Venice, which controlled a good portion of the Adriatic coast at the time, securing it from pirates to ensure that the Republic’s vessels and cargo were kept safe in transit.

The streets of the old city of Rovinj head steeply up the hill in random patterns, and are made up of smooth cobblestones that have been worn down through years of pedestrian traffic. Cars themselves are banned from the old city, which makes this a pleasant place for a nice stroll as you don’t need to compete with motorized traffic for priority.

Rovinj is one of the few remaining places in Istria where one can still hear the Istriot language spoken, a mother tongue for the region more closely related to the Ladin language of the Alps region than standard Italian.

At the top of the hill in Rovinj is St. Euphemia’s Basilica, overlooking the city and dominating the landscape for miles. 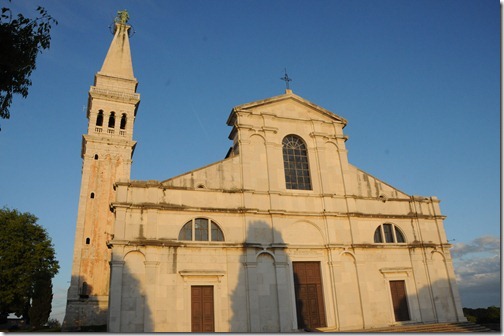 You’ll note that the Campanile (bell tower) of the basilica looks remarkably similar to the famous St. Mark’s Campanile in Venice, which is most definitely not a coincidence, given the centuries long control that Venice had over this area. Nearly every city in Istria has one of these types of bell towers, with the Rovinj Campanile being one of the more beautiful and striking examples. 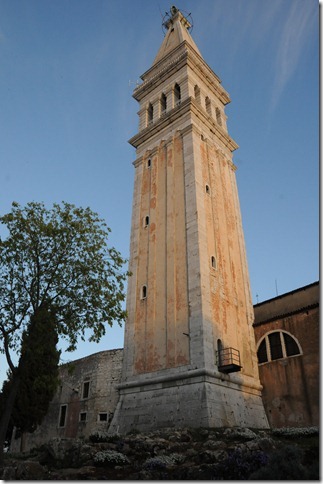 Rovinj is a very popular seaside tourist resort for Croatia, and receives large amounts of visitors in the summer, many of them arriving via a two hour ferry from Venice. During my visit in April, the tourist crowds were not extensive yet, as the season was just beginning, making it a fairly good time to visit if you want to stay away from the tourist hordes. 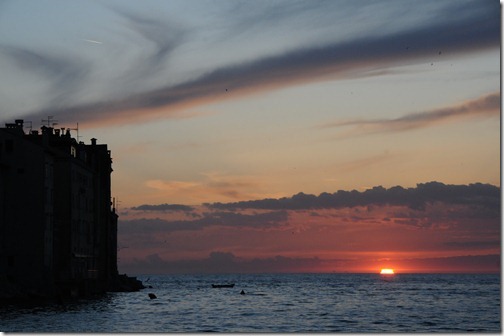 The city of Pula in Istria really provided for the biggest treat for me on this trip. Like other Istrian towns, it was seaside, beautiful, and blessed with good weather. But what really made Pula interesting was the extensive Roman ruins in the city, particularly the Pula Arena, a nearly 2000 year old Roman amphitheater that is the sixth largest surviving amphitheater from the Roman Empire.

The Pula Arena is unique in that it is the only surviving Roman amphitheater to retain a complete circuit of outer wall, really allowing you to appreciate its size.  In addition, it is still actively used for concerts and shows, making it not just part of history, but an intricate part of local life in Pula. 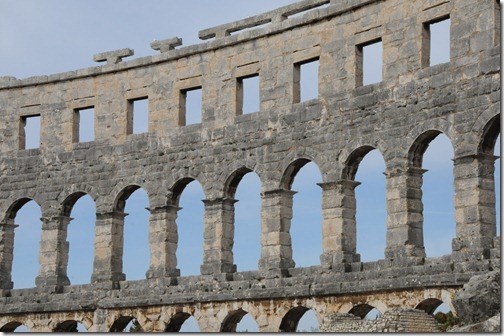 Standing in the middle of this ancient structure, it is chilling to imagine the spectacles that unfolded here in ancient times, with brutal gladiator battles that involved fierce animals, bloody violence, and the roar of a Roman crowd.

The Pula Arena is not the only Roman landmark in the city. A short walk away towards the center of the town takes you through the Arch of the Sergii, a Roman triumphal arch dating from approximately 29-27 BC.

These type of Roman arches were the inspiration for famous modern triumphal arches such as the Arc de Triomphe in Paris, the India Gate, and the Washington Square Arch in New York.  This particular arch was built to commemorate the Roman victory in the famous Battle of Actium, which pitted the legendary Caesar Augustus against the powerful Mark Antony and and Cleopatra VII, his lover and the last pharoah of Ancient Egypt.

Structures like this really provide a link to the past, and one can only imagine the procession of conquerors, heroes, slaves, and peasants who have passed through this arch over the years, each with their own passions, hopes, and secrets. 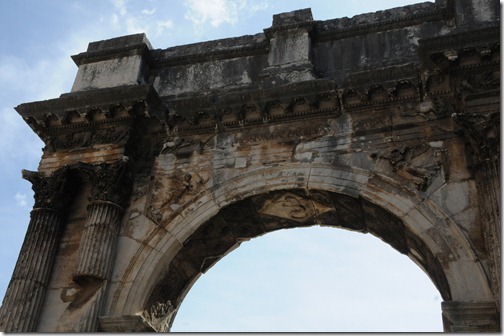 Another superb example of Roman architecture in Pula is the well-preserved Temple of Augustus, which can be found just pass the arch and in the old center of the city. This temple, dedicated to the goddess Roma, has been dated to sometime between the years 2 BC and 14 AD during the reign of Augustus, the first Roman emperor. 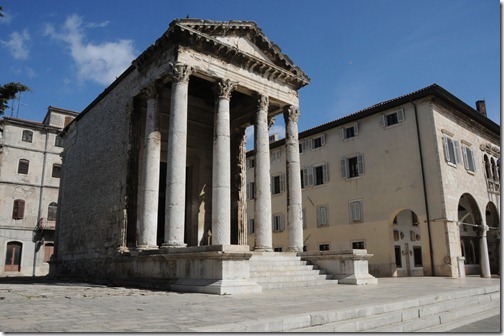 While these temples were at one time ubiquitous, it is difficult to find many of them remaining as the majority of them were pulled down upon the Christianization of the Roman empire. This particular temple was spared, however, as it was converted to a church during Byzantine times.

The inside of the temple contains a small museum, with various Roman sculptures displayed within. 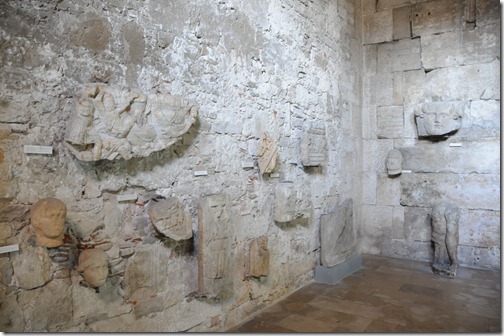 The one dark side in the history of this temple came during WWII, however, as it suffered a direct hit during an Allied bombing run. It was repaired after the war, however, and it’s hard to tell that it was damaged at all.

The plaza in front of the temple was the historical center of Pula since Roman times, and was the location of the city Forum, the center of life in Roman towns. It’s intriguing to think of how this particular view has changed over the last 2000 years, and what it was like to live as a citizen in the Roman empire during those times.

High on a hill in the north-central part of Istria sits a medieval village known as Motovun. Built on the location of a much older Roman fortress, it was controlled by Venice for hundreds of years, vestiges of which can be found in the population, with nearly half still speaking Italian as their mother tongue. 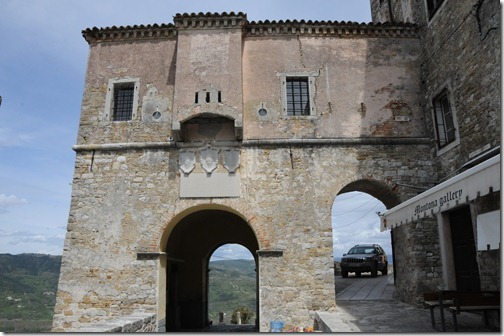 Motovun also has the claim to fame of being the birthplace and childhood home of Italian-American racecar driver Mario Andretti, who used to race down the narrow mountain streets of Motovun in hand-crafted carts. 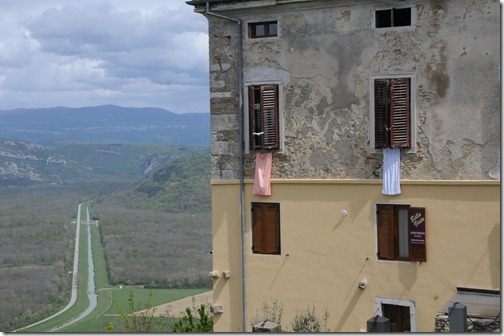 The city of Motovun commands impressive views of the surrounding countryside, which is scattered with forests that contain some of the most expensive and tasty truffles in the world.  Special truffle-sniffing dogs that used to find these rare fungi are actually kept kenneled within the walls of the fortress itself. This is big business in this region, as evident from the many shops within Motovun that specialize in the sale of these tasty treats.

The picturesque views and relaxing nature of Motovun attract a large number of cyclists who ride their bicycles up the steep hill and stop to enjoy the scenery before continuing on their way through the beautiful hilly Istrian countryside. A stop for lunch or a coffee here is a highly relaxing way to enjoy Istria, and is greatly recommended.  My Croatian friends and I sat and enjoyed lunch here on the day before I left, taking in the view and enjoying a fresh local meal.

Istria is one of those places in the world where time seems to slow down, and no one seems to be in a rush. In addition, it also sits in a region of the world that is steeped with history, having passed through the hands of multiple powerful empires over the years. If given the chance, I would definitely return here and explore some more, as there is so much history to explore here in this sun-drenched paradise.

After my time in Istria, my journey continued on to an event in the gold-domed Ukrainian capital of Kiev, one of my favorite cities and the topic of my next blog post.