In the southern part of Africa, one of the greatest natural wonders of the world sits virtually untouched by the world’s tourist hoards.  It is called Mosi-oa-Tunya by locals, but most of us know it by its western name, Victoria Falls.  The trip I took to Victoria Falls in February 2011 was an eye-opening experience to a place seldom visited by foreign tourists.

I traveled to Victoria Falls with my good friend Joel Oleson while we were both on the way to a speaking trip in Johannesburg, South Africa. We had both wanted to get to the Falls, and also had a desire to see some of the countries in the area, which neither one of us had traveled to recently.  Not to mention the fact that it’s not often you get to travel to two countries that start with the letter ‘Z’ that often. We booked a flight from Johannesburg airport to Livingstone, Zambia in advance, but discovered that that flight first makes  a quick stop in Victoria Falls, Zimbabwe.  Since we knew we would fly out of Zambia to get back, Joel and I made the quick decision to simply deplane in Zimbabwe and start our tour of the area there.

After a fun time getting a visa at the airport (another full page one), we picked up a taxi to the falls.  Historically, the Zimbabwe side was the most developed side for tourism, but recently because of the political turmoil in Zimbabwe may more tourists have been visiting the Zambian side.  This is unfortunate, as the Zimbabwe side is much more impressive.

The water pours from a flat plain into this chasm, which then snakes around a massive cliff-like island.  Most definitely the most impressive waterfall I’ve seen in terms of pure geological interest for me.

The massive amount of water heading over the falls creates a mist that then shoots up the sides of the cliffs.  The end result being that you get the equivalent of rain coming up from below you and then falling back down. 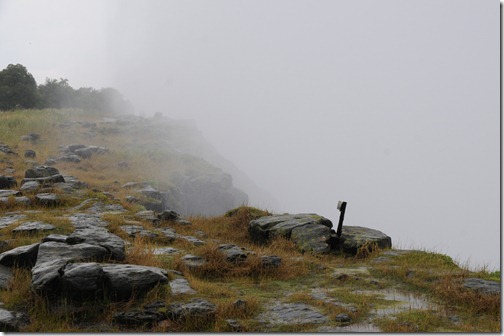 And speaking of rain, an afternoon African downpour decided to hit when we were out on the trail, soaking both Joel and I completely to the bone.  Fortunately all of my travel gear was stuffed into my waterproof Saddleback leather bag that I take with me everywhere, limiting the damage.  Honestly, the rain shower was refreshing and liberating in a way.  We were in the midst of Africa, and nothing was going to slow us down.

One of the workers at the park chatted with us and we ended up getting invited to try a local Zimbabwean meal at his house. We gladly accepted, and got a lift through the town to the local market.  Zimbabwe is a poor country, to be sure, but there is an optimism here that you can feel in the air. 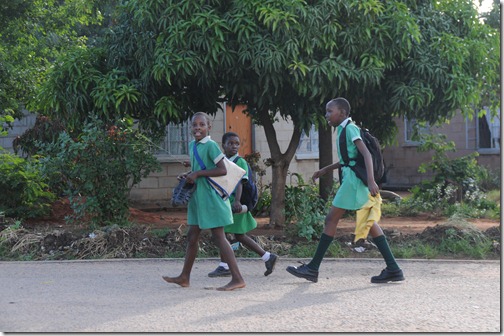 The local market was full of fun things to eat like caterpillars, worms, and other fun creepy crawly things.  We ordered up some caterpillars and some okra, paid in US dollars, and left to cook up some fun.

Speaking of paying in US dollars, you may have heard about the fate of the Zimbabwean dollar, which had a record 231,000,000% inflation rate before they finally just killed the currency completely.  We picked up the highest denomination every printed, the 100 trillion dollar bill!  I’m told it was worth the equivalent of about 10 cents US by the time they decided to just throw in the towel and use US currency as legal tender.

At our friend’s house, we cooked up a wonderful local meal of worms, grubs, caterpillars, and some other food I couldn’t identify.  I also tried some of the local beer, brewed by hand in the local pub from grains. I can’t say with honestly that this was one of the world’s greatest meals, but it was one of the more interesting ones.

Our next stop was the country of Botswana, a short taxi ride from the falls. We crossed the border on foot and made our way into a country we knew little about, but that would end up being one the most fascinating country in terms of wildlife that I had visited.

So Africa is full of large game wildlife, but unfortunately most of the wildlife exists in fenced off wildlife reserves or parks.  Not with Botswana…I had NEVER seen so much wildlife simply roaming the streets.  Baboons would run across the street in troops, wildebeests would scour for food in the front-yards of houses, and elephants would cross the road near bus stops.

I was told that the wildlife in this country is taken care of well, and it was immediately evident that this was the case. In all of Africa, I had never seen humans and animals meshing harmoniously together in such as way.

This was one night we splurged a bit on accommodations, staying at the Chobe Safari Lodge along the Zambezi river. After an incredible African sunset, we slept in (somewhat upscale) mud huts underneath mosquito nets and listed to the hippos grunt in the river all night.

Indeed, the hippos, crocodiles, and elephants often wander onto the grounds of the lodge, and they warn you repeatedly to exercise caution and stay away from them.   Kind of unnerving, but also fascinating in a way.

After a good recharge in Botswana, we headed over to the Kazungula ferry crossing between Botswana and Zambia. The ferry was pretty rudimentary, and you just hopped on board with the trucks and cars.  The ferry has an unfortunate past, as an overloaded truck sank it back in 2003.  Made the trip more interesting, especially considering that the river was full of crocodiles. 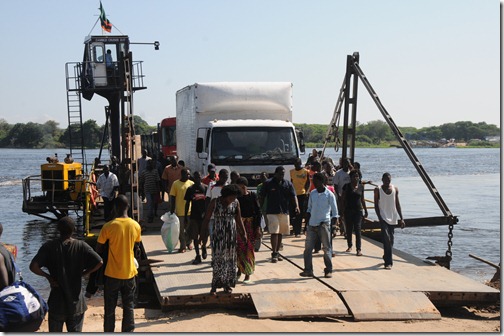 While the ferry took us to Zambia, we immediately instead hired a car to take us to the Namibian border so we could check out this country first.  The area of Namibia we went to was called the Caprivi Strip, a small bit of land historically given to Namibia when it was controlled by Germany so that the Germans would have water access to the Zambezi river.  We checked out the local market, a bustling place filled with fish and very very fresh meat. 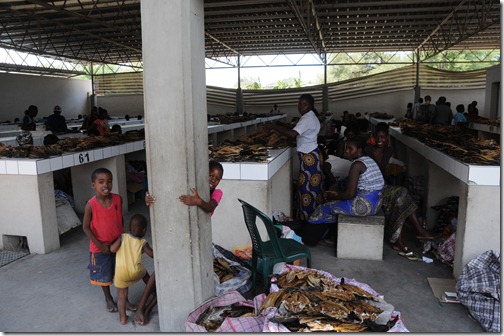 The most interesting part of our Namibian trip involved a short detention in a Namibian chiefdom near Mulanga for driving across the Chief’s threshold. I can ensure, you, it wasn’t our intention, but apparently our overeager driver drove across a forbidden area, and the chief’s secretary of state had a discussion with us in his office later. I think he was completely confused what it is that we do and why were in Africa, but we had a very genial talk and we were released eventually.

Apparently these ‘chiefdoms’ existed all over Namibia, and have for hundreds of years. This particular one was around for at least 500 years, and are the approximate equivalent of a Native American reservation in the States.

After our short trip to the Caprivi Strip, we drove back into Zambia and headed to Livingstone.  On the way, we passed some beautiful Zambian countryside, very agricultural and full of a cheerful populace. 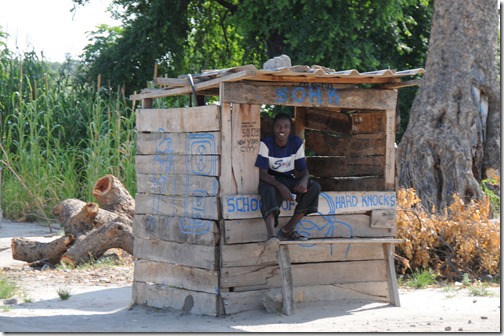 Just outside of Zambia, we caught sight of a cloud of steam…a vintage steam locomotive was on the move!  We raced to try to intercept it, and found the spot where it came to stop on the tracks.  Not people easily deterred by a challenge, we hopped out of the car and ran along the tracks to intercept this relic from another age, not even sure what it was doing in the middle of Africa!

It turns out the train was the Royal Livingstone Express, an authentic steam train used for deluxe dinner tours from Livingstone.  After the train engineer and cooks got over their initial shock at seeing us, they gave us a tour of the beautifully restored train and even let us shovel coal into the antique engine.  Not the type of thing you get to do every day…to be sure. 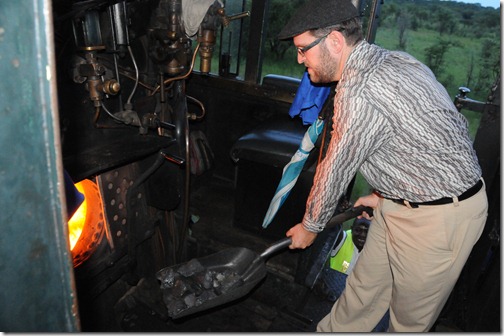 On to Livingstone, and the inspiration for the title of this blog post. While there, we stayed at the lodge of a Frisian gentleman who, in our opinion, could have easily passed for Dr. Livingstone himself.  He ran the lodge in question, the Livingstone Safari Lodge, a highly recommended spot to stay at if you are in the area. It is secluded, and the sun had set by the time we stumbled through the dark to find the lobby.  Upon commenting upon this to the owner, he responded back, "Well, you are in Darkest Africa."  This guy ran an excellent lodge, with each house stylized in whimsical designs.  You almost felt like you were in an African edition of a Dr. Seuss book when you stayed here.

On our final day in the area we visited the Zambian side of Victoria Falls.  Also extremely impressive, it had unique features such as a hiking trail that took you to the giant cliff island just off the waterfall itself.

It also had some great views of the Victoria Falls Bridge which separated Zambia from Zimbabwe.  We were invited to bungee jump off the bridge, but wisely declined.  Turns out one of those bungee cords snapped the following year in a highly publicized incident, so worked out pretty well for us to avoid it.

Oh, and be cautious of the baboons, they are EXTREMELY aggressive here.  They will attempt to take away any food or beverage you have by force.  We had an interesting time trying to get this guy away from us.

The falls are simply an amazing place, whether you check them out from the Zimbabwean side of the Zambian side.  The name Mosi-oa-Tunya (Pronounced like Moose-oh-TOONya) means the ‘smoke that thunders’, an apt name. 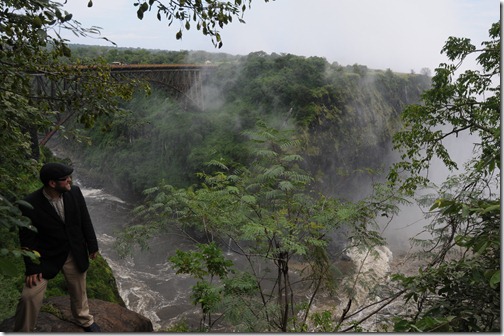 And another word to the wise…if you are going to go across the walking bridge to the island, probably best to wear some type of rain gear.  We ran across without any, getting soaked once again on the same trip.

Overall, this trip ended up being one of the best, both because of the sight of the falls but also because of the lack of busloads of camera-clicking tourists.  I would highly recommend going before they arrive, however, as I’m sure tourism will go up now that the political situation is improving in the area. 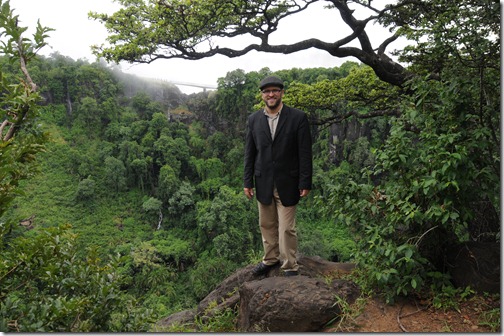 As a final note, I’ve pieced together my personal top five list of things to do if you make it to the area:

1. Visit the Zimbabwean side of the falls if at all possible…you can pick up a visa right at the bridge (For a small fee) and head back to Zambia later in the day if you want.

2. Get a chance to get to Botswana. The border is only an hour away, and the wildlife there is simply amazing.

3. Get local, be sure to chat with the people.  The real experience of Africa is not in the game parks, but in the cities and on the hearts of the people who live there. As a cautionary note to avoid the scams, be sure you approach them first, rather than the other way around, as there are scam artists arounds, but I’ve found that the majority of the people here are good and kind and if you approach them first you will be fine.

4. Be sure to look out for the smaller animals that live here, don’t just focus on the large ones (elephants, giraffes, etc.)  Some of the most interesting creatures we saw in Africa were crawling along the ground and flying through the air.

5. Highly consider a stay at the Livingstone Safari Lodge in Zambia, a definite treat and a highly unique lodging experience.