My visit to Fiji in March of 2011 was significant in several ways.  First, it was my 100th country visited overall, but secondly and more importantly, it was one of my most interesting travel experiences yet.  By the end of the trip, I was covered from head to toe in pink dye and I had a belly full of kava root. But first, let me make one thing clear…this wasn’t the typical Fiji visit.  I was traveling with fellow world traveler and close friend Joel Oleson, and secondly, we weren’t really interested in the typical Fiji experience of lying on the beach, drinking from a coconut, etc.  Not to say that isn’t a nice thing to do overall, but on this trip we were really looking to connect with the Fijian people and get a feel for life on this beautiful island.

One thing that came as a surprise to me about Fiji was that nearly half of the population consisted of descendants of workers who migrated from India / Pakistan (Hindustanis as they called them here.)  Many still maintained their original religions, so there were mosques and Hindu temples spread across the island, including the largest Hindu temple in the Southern Hemisphere, called the Sri Siva Subramaniya temple and located just outside of Nadi. 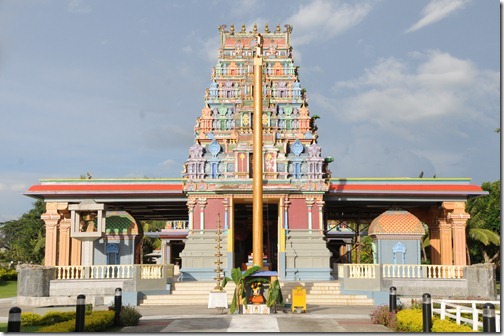 Joel and I set out to explore the interior of the island, in a rented 4WD vehicle, but eventually were stopped by the ruggedness of the roads in the interior.  I don’t know about you, but whenever you get shocked looks from locals and questions about whether you are lost, that means you are on the right path to something special.  In any case, we ended up in a Melanesian village called Vatutu sometime later that night. 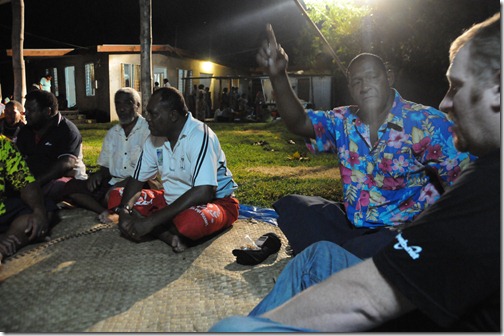 In the village, it was birthday time!  A large group of Melanesian villagers had gathered to celebrate the birthday of the son of one of the elders, and we were invited in to celebrate!  The village elders sat us at the head of the celebration area, and we spent hours with the Fijians, drinking Kava root, a local drink that has the main effect of making your tongue tingle.  Aside from that, it’s really quite tame, but it’s an integral part of their culture.

To top things off, that night one of the villagers offered up his small house for us to spend the night in.  By itself, the late night Kava drinking Melanesian birthday would have made this a memorable trip, but we weren’t quite done yet with Fiji!  The next day was spent driving around the island, visiting local villages, foraging for clams in a lagoon (on Joel’s part) and making new friends.

Oh, and by the way, Fijians love their rugby!  We witnessed more than a few games of the sport underway.  I haven’t seen this enthusiasm for rugby since New Zealand!

On our last day in Fiji, a little research and chatting with the local Hindustanis led us to understand that today was the day of the Hindu Holi festival.  If you’ are familiar with this one, this is the celebration where everyone throws colored dye at everyone else!  We simply had to figure out a way to get in on the action!  A little research later and we found the location of a Hindu temple in Suva and made our way into a huge color fest!  We were welcomed with open arms and quite a large amount of colored dye.

By the way, the dye never did come out of that shirt! Celebrating Holi with Fijian Hindustanis at the Suva temple was an absolute blast, and completely worth the trip itself.  After the temple visit, we started the drive back to Nadi airport to catch our flight, and happened to notice a van full of Hindu Holi devotees heading out on the road!  They noticed our color and invited us to join them.

The next part of the trip might have been the most magical…as we joined them as they moved from house to house, singing, playing instruments, and throwing color on everyone! 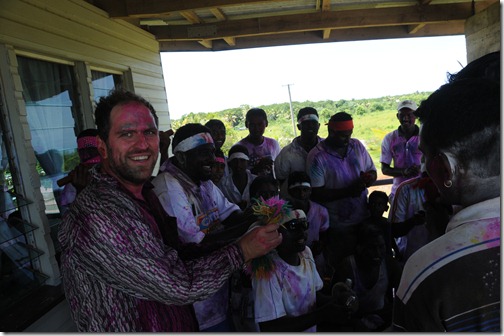 It was the Hindu equivalent of a bunch of Christmas carolers, and we found out from them that they were specifically targeting the houses of the infirm and disabled who couldn’t leave their houses.  They were bringing Holi to them!  We sang, danced, and had an amazing time.  Those guys knew how to have an amazing time!  It was one of my most memorable travel experiences.

An amazing trip just had to also end with one of the most beautiful sunsets that I have ever seen.  All we could do is sit there with our mouths gaping open, staring at the sky on fire and mumbling ‘wow’ over and over again.  A fitting end to an unbelievable trip! 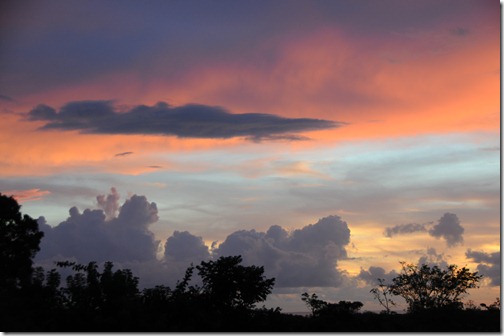 Fiji is definitely more than just white sand beaches and resorts.  There is a whole world of colorful people (no pun intended), culture, and mystery. I am aware of their political issues, and there have been some troubles recently with politics and some difficulties between the Melanesians and Hindustanis.  I hope all the best for the friends we made in Fiji, and look forward to a return trip to this amazing place.